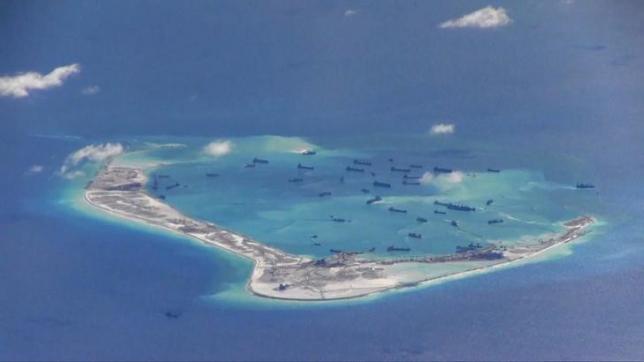 BEIJING/AMSTERDAM An international court said it would deliver a hotly anticipated ruling in the Philippines’ case against China over the South China Sea on July 12, drawing an immediate rebuke from Beijing, which rejects the tribunal’s jurisdiction.

The United States, which is a close ally of the Philippines and is concerned about China’s expansive South China Sea claims, reiterated its backing for The Hague-based Permanent Court of Arbitration and urged a peaceful resolution of the dispute.

Manila is contesting China’s historical claim to about 90 percent of the South China Sea, one of the world’s busiest shipping lanes. Several Southeast Asian states have overlapping claims in the sea and the dispute has sparked concerns of a military confrontation that could disrupt global trade.

“I again stress that the arbitration court has no jurisdiction in the case and on the relevant matter, and should not hold hearings or make a ruling,” he said.

In Manila, the foreign ministry said the Philippines would “fully respect” the tribunal’s ruling and hoped members of the international community would do the same.

U.S. state department spokeswoman Anna Richey-Allen reiterated U.S. backing for the court. “We support the peaceful resolution of disputes in the South China Sea, including the use of international legal mechanisms such as arbitration.”

But China’s official Xinhua news agency said the court was a “law-abusing tribunal” that would only worsen the dispute.

“Manila fails to see that such an arbitration will only stir up more trouble in the South China Sea, which doesn’t serve the interests of the concerned parties in the least,” it said.

A ruling against Beijing “would deprive China of any legal basis for making such a claim,” Paul Reichler, the Philippines’ chief lawyer in the case told Reuters.

For China to reject the ruling meant it had “essentially declared themselves an outlaw state” that did not respect the rule of law, Reichler said.

The Philippines argues that China’s claim violates the U.N. Convention on the Law of the Sea and restricts its rights to exploit resources and fishing areas within its exclusive economic zone.

While the territorial dispute over the South China Sea was a key issue, priority would be given to crushing Islamist militants in the Philippines, Manila’s new defense minister Delfin Lorenzana told Reuters.

Lorenzana’s comments about his priorities will add to uncertainty about incoming Philippines president Rodrigo Duterte position on the dispute. Duterte has said he would confront Beijing but also said he would engage through dialogue.

U.S. officials are worried China may respond to what is widely expected to be a negative ruling for Beijing by declaring an air defense identification zone in the South China Sea, as it did in the East China Sea in 2013, and by stepping up its building and fortification of artificial islands.

U.S. officials say that beyond diplomatic pressure, the U.S. response to such moves could include accelerated “freedom-of-navigation” patrols by U.S. warships and overflights by U.S. aircraft as well as increased defense aid to southeast Asian countries.

China has accused the United States of “hyping” the issue and warned in May that international complaints about its actions in the South China Sea would snap back on its critics. But it has largely avoided specific comments on how it might respond to the arbitration ruling.

Tensions have intensified and spread ahead of the ruling, with two U.S. aircraft carriers taking part in various exercises in East Asian waters last month in what the U.S. Navy said an effort to deter any attempts to “destabilize the region”.

Indonesia’s president on Wednesday ordered an expansion of oil exploration and commercial fishing in waters near the Natuna Islands, where Indonesian navy vessels and Chinese fishermen recently clashed.

And Japan said it had scrambled fighters to counter Chinese jets in the East China Sea about 200 times in the past three months, almost double the amount in the same period a year ago.

“It appears that Chinese activity is escalating at sea and in the air,” said Admiral Katsutoshi Kawano, chief of the Japanese Self-Defence Forces.

(Additional reporting by Manuel Mogato in Manila, David Brunnstrom and Matt Spetalnick in Washington, Tim Kelly in Tokyo and Randy Fabi in Jakarta.; Editing by Richard Balmforth and Lincoln Feast)