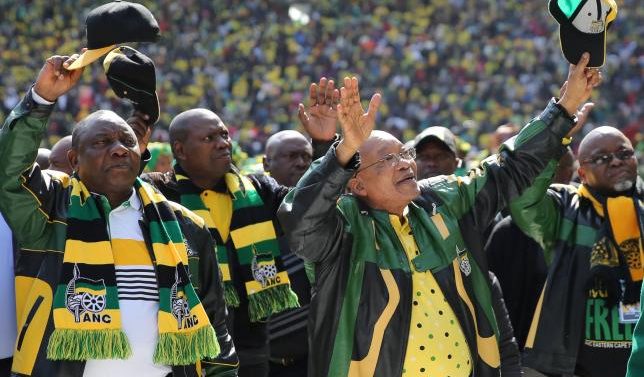 PORT ELIZABETH, South Africa A metal sculpture overlooks the ocean on South Africa’s southern coast, showing Nelson Mandela with his fist triumphantly thrust into the air and a sweeping line of diverse figures waiting to vote.

The monument in Port Elizabeth, capital of the Nelson Mandela Bay municipality, commemorates the jubilant day in 1994 when South Africa held its first multi-racial elections, overwhelmingly voting the African National Congress (ANC) and Mandela into power.

At local elections this week the atmosphere is expected to be far more subdued, with ANC supporters increasingly frustrated at a lack of jobs and basic services as Africa’s most industrialized country teeters on the edge of a recession, and disenchanted at perceived corruption in the ruling party.

Opinion polls suggest the vote on Wednesday could herald a sea change in South African society and politics. The ANC could lose major cities it has held virtually unchallenged since the end of white-minority rule 22 years ago.

Such an historic reversal could reshape the political playing field ahead of the 2019 general election, and may also embolden President Jacob Zuma’s rivals within the ANC to challenge him.

With a quarter of South Africa’s potential workforce unemployed and the jobless rate among black people aged 20-24 at almost half, millions of voters say their lives have barely improved since the ANC won power in 1994.

Many supporters are switching allegiances to the main opposition Democratic Alliance (DA), bolstering its attempts to attract black voters and shake off its image of a party that chiefly serves the interests of the minority white community.

This kind of defection – an unthinkable prospect in years gone by – is now being considered across the country, even in symbolic heartlands like Nelson Mandela Bay.

“In past elections the DA wouldn’t dare to come here,” 25-year old IT graduate Zodwa Twani told Reuters from a rundown township in Port Elizabeth where DA placards line the streets alongside images of President Jacob Zuma.

“I loved the ANC but now they only focus on themselves, not the people. Mandela would have been ashamed,” Twani added, standing in a pot-holed street in a ward where the ANC won 80 percent of the vote five years ago and the DA barely registered.

The ANC won 52 percent at the 2011 local election in Mandela Bay municipality overall, compared with the DA’s 40 percent, but opinion polls suggest it could struggle to win a majority on Wednesday.

This reflects the trend in other urban centers; the economic hub of Johannesburg, the capital Pretoria and Nelson Mandela Bay on the east coast, could all fall to the DA, according to the polls.

Opponents say defeat in a region named after the ANC’s liberation hero would be a major embarrassment and could mark the beginning of the end for the comfortable grip on national power the party has held since the end of apartheid.

“People are sick of the unemployment, maladministration and rampant corruption of the ANC,” Athol Trollip, the DA’s mayoral candidate in Mandela Bay, told Reuters.

“To lose Nelson Mandela Bay would be humiliating for the ANC and terminal for Jacob Zuma.”

Danny Jordaan, the ANC mayor of Nelson Mandela Bay, did not respond to request for comment.

The ANC though has pointed to the significant improvements in the lives of millions of poor South Africans since the end of apartheid, even if many feel progress has been too slow.

For example, according to United Nations, the percentage of the population with access to at least basic sanitation increased to 79.5 percent in 2014 from 62.3 percent in 2002.

Zuma retains a ‘man of the people’ appeal in rural areas but a string of corruption scandals have damaged his reputation in cities where there is greater access to education and private media, opinion polls show.

The radical new Economic Freedom Fighters (EEF) is also gaining ground across the country, though it is still a distant third force behind the ANC and DA.

It is winning support from black voters frustrated about inequality in country where black people make up 80 percent of the 54 million population, yet most of the economy in terms of ownership of land and companies remains in the hands of white people, who account for around 8 percent of the population.

‘THIS TIME IS DIFFERENT’

If the ANC loses power in Mandela Bay and other big metropolitan areas where votes will be close, like Johannesburg and Pretoria, it could lead to challenges to Zuma from opponents within the ANC, say political analysts.

The ANC leadership has publicly backed Zuma and has said it expects to win all the municipalities it currently holds at the election this week and some its opponents control.

Jordaan and other ANC candidates will be relying on the fiercely loyal support base it still retains due to its central role in ending apartheid and its association with Mandela.

“They are not doing well but I will vote for the ANC because my mother does,” student Tandiswa Kwela, 23, told Reuters.

“My mother says they fought for our freedom and we should never forget that. When Mandela looks down on us he must see we still support his party.”

Such is the draw of Mandela, who died in 2013, even the DA – which last year it elected its first black leader – has used his name in its election campaign, saying it is the only party that can deliver on Mandela’s vision for South Africa.

This has infuriated the ANC, and Zuma, who told supporters last week that voting for the DA would be like supporting an “oppressor”, turning the focus of the election on to race and who owns the rights to use Mandela’s brand.

“Mandela believed in ‘non-racial’ politics so the ANC shouldn’t play that card,” said swing voter Anele Dazana, standing in the shadow of the Mandela sculpture.