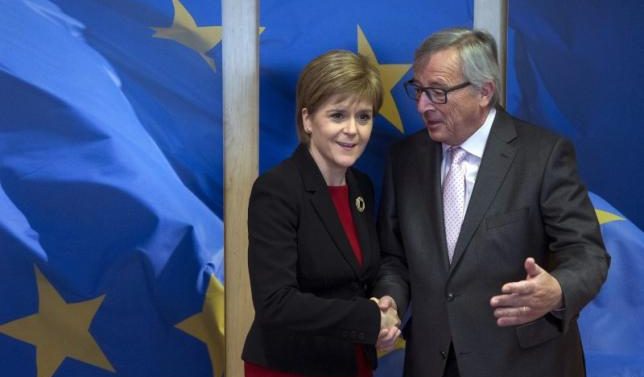 A spokeswoman for the EU executive said Commission President Jean-Claude Juncker would meet First Minister Nicola Sturgeon in the late afternoon after Britain’s 27 partners meet without the UK to discuss how to respond to a Brexit.

They are expected to launch a period of reflection, culminating in a set of EU reform proposals to be unveiled by March of next year, the 60th anniversary of the founding Rome Treaty. Leaders have said the focus will be on getting a grip on migration, bolstering security and creating jobs and growth.

“It’s important to have this meeting of 27 because it will show the unity of the 27,” said Belgian Prime Minister Charles Michel, describing the British vote as a wake-up call for Europe.

Sturgeon has said Scotland, where more than 60 percent of voters said they wanted to stay in the EU, does not want to be forced out of Europe by England, the most populous component of the United Kingdom, which voted to leave.

She has raised the prospect of the Scottish parliament trying to block exit legislation, and alternatively holding a new referendum on independence.

The Scottish Nationalist premier was to meet European Parliament president Martin Schulz first in Brussels to discuss the way forward. But the president of the European Council, Donald Tusk, who chairs EU summits, turned down her request for a meeting, his spokesman said.

Diplomats said there was a risk that the high-profile welcome for Sturgeon, a day after Cameron’s last EU summit, could be seen in London as an encouragement to secession, although EU officials denied any such intention.

Cameron told European Union leaders on Tuesday that Britain’s future relations with the bloc could hinge on the EU’s willingness to rethink free movement of workers, which he blamed for the referendum “no”.

Juncker rebuffed that explanation for the vote, saying that successive British leaders had participated in “Brussels bashing” and should not be surprised if their citizens believed them.

German Chancellor Angela Merkel doused any hopes that Britain might yet reverse its decision, warning against “wishful thinking”. While she persuaded fellow leaders to give London more time to hand in its formal notice to quit, Merkel said Britain could not drag out the process endlessly and made clear that a new government would not be allowed to “cherry-pick” the parts of EU membership benefits that it liked.

“Some think that Britain needs more time. I hear this, yes, but I think it strange. It’s a type of surrealism,” said Belgium’s Michel.

Cameron, who announced his intention to resign after losing the referendum partly due to concerns about immigration, told his last summit he hoped his country would maintain as tight an economic and political relationship as possible with the EU.

“Britain will be leaving the European Union but we will not be turning our back on Europe,” he told a late night news conference after a dinner at which he said many European partners voiced regret and friendship for Britain.

EU officials and diplomats said the mood was coolly polite.

In a veiled rebuke to Leave campaign leaders such as Boris Johnson, who is vying to succeed him, Cameron said Britons would have to understand they could not keep all the benefits of EU membership without the costs.

“If you want the full benefits of the single market, you’ll have to be part of every part of it,” he said.

“If they don’t want free movement, they won’t have access to the single market,” he said, adding that the City of London would no longer be able to act as a clearing house in euros.

The European Parliament adopted a non-binding resolution on Tuesday demanding that London activate the EU treaty’s voluntary exit clause as fast as possible. That would launch negotiations on withdrawal terms with a two-year countdown to departure.

“Waiting for several months, as has been announced by you, Prime Minister Cameron, and taking the destiny of our entire continent hostage purely for internal party political reasons would be totally unacceptable,” European Parliament President Martin Schulz told the British leader in the summit.

“That would not mean stability – on the contrary it would mean prolonged uncertainty,” the German Social Democrat said, summing up the fears of many EU partners.